Mill-tek has been awarded the Danish Industries Initiative Award 2010. 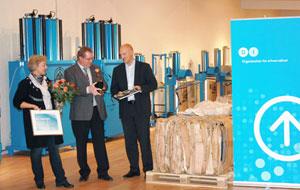 Mill-tek has been awarded the Danish Industries Initiative Award 2010.

The award was presented on Novemeber 10th and handed over to proud owners Mona & Kristian Skannerup. The President of the DI Region Midwest,  Jens-Ole Aagaard Jensen  stood for the ceremony, and said some nice words about Mil-tek's business idea and the whole concept behind the Mil-tek, and not least the basis for why Mil-tek should be presented this price.

Mona & Kristian Skannerup received the beautiful sculpture which is made by sculptor Jørgen Pedersen. Jorgen Pedersen was unable to attend the ceremony but had asked the Chairman of the DI Midwest hand them the sculpture, and his book which he had written a little note. Subsequently, Kristian word and had the opportunity to say thank you for the price, and briefly talk about what the price means not only in the present moment, but also how it puts thoughts started about the future and how Mil-tek can develop even more and take more initiative.

Finally, the mayor of the Municipality of Holstebro, HC Oesterby asked to speak, and came in his speech praised around the Mil-tek and mentioned in particular the story of how a man from Jutland almost 20 years ago, discovered a problem with waste management, and instead of doing nothing, sought out the opportunity to come to this problem. It would later turn out to be the start of Mil-tek. Mona & Kristian Skannerup On behalf of Mil-tek Denmark once again like to take this opportunity to say thank you for this prestigious award.